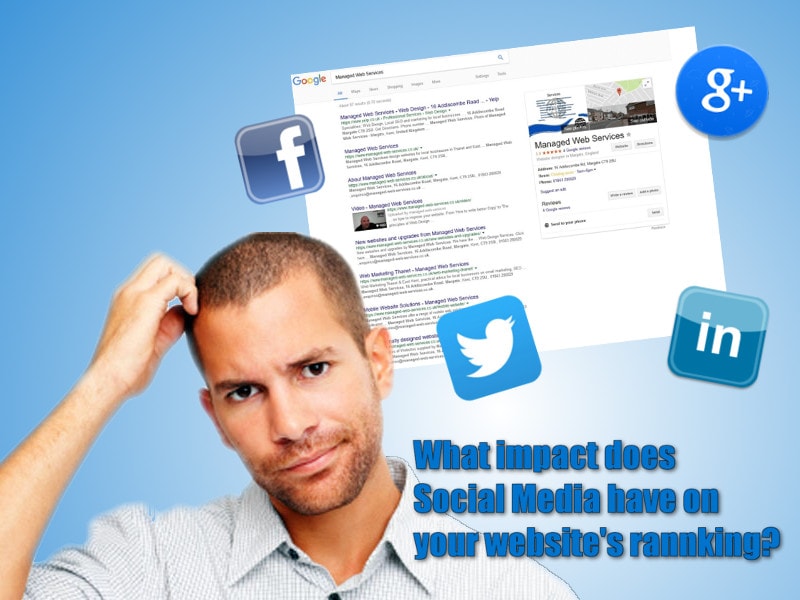 What exactly is the relationship between SEO  and  Social Media ? Everyone knows that Social Media is vital in terms of content marketing, but what effect does it have on how well your website performs? Google have repeatedly stated that it does not include Social Media as part of its search algorithm. However, things are never that simple, the fact that Google does not use social media as a ranking signal does not mean that social media does not influence page rankings. There does appear to be a very strong correlation between social signals and page ranking, however that does not necessarily mean that there is any causal link between the two.

Google does not index all Social Media.

Google have stated that they treat Facebook and Twitter posts exactly the same as any other web page as far as search is concerned. On Twitter for example each tweet is treated as if it were a web page in its own right.  The limited ability to crawl Social Media is one of the reasons that Google does not use Social Media as a ranking factor

As Google is unable to crawl all of Social Media, it is difficult evaluate the relative authority of pages, or tweets within those sites. Social Media sites tend to be very volatile, changing constantly. Google can only visit pages periodically and it is very possible that the web page has changed radically between visits. The volatility of Social Media tweets and Facebook pages, combined with the limited ability to crawl all the pages, are two of the reasons that Google does not use Social Media signals in its ranking algorithm. The number of followers is one of the social signals that Google ignores, for these very reasons. That being said it appears that there is a correlation between the number of followers, connections and influencers that are connected to particular social media platforms and a strong website ranking. Google are quick to point out that a correlation does not imply a causal relationship.

Google does not use your Social Media profile as a ranking factor.

According to Facebook there are over 83 million fake accounts. Twitter reportedly has over 20 million fake accounts. In fact it is estimated that between 5%-11.2% of all Facebook profiles are fakes The problem of fake profiles is compounded by the difficulty of establishing the identity of individuals across various platforms. How can Google determine that the individual on Twitter is the same individual on Facebook? Google would like to use social profile identities as a ranking factor and are working towards doing so. At present the problem with establishing the authority of a web page based on Social Media profile is preventing them from using it as a ranking factor. It should be noted however, that although Social Media profiles do not affect your WebPages’s position in search engine results, they do influence the content of your search results. Social Media Profiles rank highly in their own right.

Which Tweets does Google Index

It is estimated that there are over 500 million tweets every day which is one reason that Google is not able to index every tweet. As of June 2015 Google stated that they were indexing less than 4% of all tweets. There are a numbers of factors which appear to influence which tweets are likely to appear in Google’s search results. The more more favourites a tweet has, the better chance it has of showing up in the Google index. The same is true for the number of retweets, although the number of retweets is less important than the number of favourites. This may be due to the large number of accounts that auto retweet. Google also appears to use level of Social Authority as measured by Moz’s Followerwonk tool in determining which tweets it indexes.  Social Authority is important because it is a more sophisticated measurement of engagement  than the number of followers , it takes into account the authority level of people engaging with a particular Twitter user. Google is also more likely to index tweets from verified Twitter Accounts. Other things that you can do to increase your chances of getting your tweets into Googles’ seach results include using a hashtag and including an image with the tweet. However you should not include @username to mention other users in your tweets. Google appears to view these tweets as more converstional than informative and is therefore less likely to index them.

What is the realtionship between SEO and social media and backlinks? We know that backlinks, that is quality external links back to your website, are a major ranking factor. What effect do back links from Social Media have on website ranking?

There are two types of links;

DoFollow Links – These links are used by search engines to help rank a site.

NoFollow Links – These links are not used by search engines, they do not influence PageRank.

The relationship between SEO and Social Media is not a simple one, and it is subject to constant change. Although Google does not factor in social signals from Social Media, it is still worth cultivating a respected Social Media Profile with as many influential followers as possible. The way to do this is to produce quality content in your Social Media that will be retweeted and shared. Ultimately Social Media should not be about the search for rankings but about building up your brand and driving qualified traffic to your website.