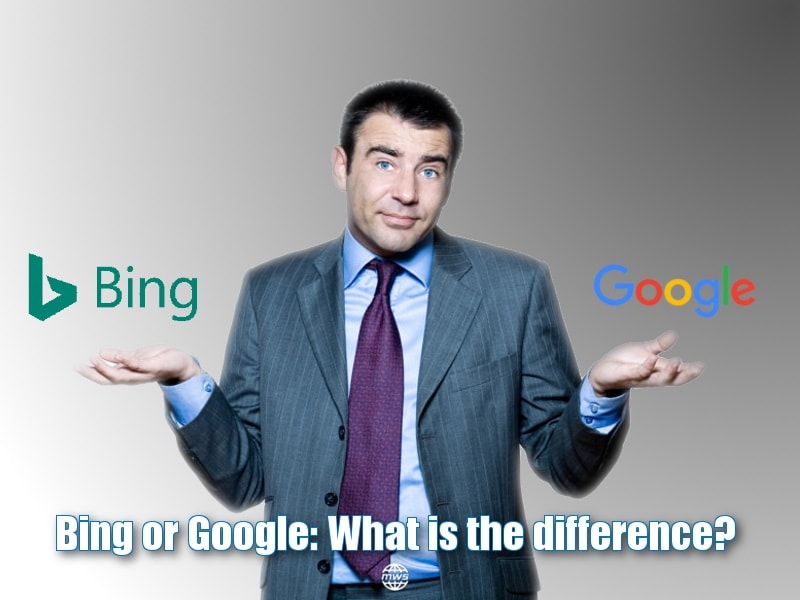 Bing or Google: Which search engine has the largest market share? “Bing” the Microsoft search engine has been growing in popularity, although it still lags far behind Google in the UK. The figures for UK Market share, courtesy of Statista for July 2017 are as follows:

Bing has recently hit 20% market share in the American Market (Google has 64.5% US market share). Bing has an agreement with Yahoo whereby Bing powers the majority of  Yahoo searches.

Bing’s growth has not, as you might expect been at the expense of Google. The reasons for the increase in Bing’s popularity are twofold. Firstly, Bing has taken market share from it’s Search Alliance partner Yahoo. Secondly, Bing has been built into Windows 10 the Microsoft operating system. Windows 10 provides a search box in the operating system’s task bar by default, which will search either the computer or the internet, using Bing. Windows 10 also features a voice activated search feature called “Cortana”, which by default is powered by Bing. Windows 10 also features a new browser called “Microsoft Edge” which replaces “Internet Explorer”, “Microsoft Edge” also defaults to Bing.

Bing or Google: A comparison

Bing or Google: Which search engine has the most features?  The first thing that you will notice, if you use either search engine, is that the results pages look very similar to each other, however, there are a few differences in the results.

• Bing and Google both use backlinks as a ranking factor, however, Google’s evaluation of backlinks appears to be far more sophisticated than Bings. Google seeks to index every piece of content available on a domain, whereas Bing actively removes pages from their index if they are found to not have enough link authority. The result is that Bing will not generally rank a page unless it has at least one external website link to it.

• Bing tends to put more emphasis on social media signals than Google. The result is that social signals correlate very closely with higher rankings in Bing. Microsoft who own Bing have deals with Facebook and Twitter to get more access to social data. Bing results feature trending news from social media in their news search results. Google has an agreement with Twitter to show tweets in their in results pages.

• Many people believe that Bing’s video search is significantly better than Google’s, this may seem suprising given that Google owns YouTube. Google video search provides users with vertical list of videos with small thumbnails. Bing provides thumbnails that you can click on to play without leaving Bing, in some cases it’ll provide a preview if you hover over the thumbnail.

• If you are searching using autocomplete or using a wildcard in your search Bing generally provides more autocomplete suggestions than Google. Google only gives four, while Bing gives eight.

• Bing’s image search is well known for being better than Google’s. It is generally agreed that Bings provides sharper and higher quality images in their results than Google. Bing was first to introduce ‘infinite scroll’ which means that you do not have to click through the various pages of image results, you simply scroll through. Google now offers the same functionality. Bing also offers a range of image filters so that you can search for different image layouts such as tall, wide or square etc. Google does have one advantage over Bing in regard to image search and that is that bing does not offer GIFF images in its results.

• Bing appears to favour older websites with more official domain names, such as .gov or .edu, rather than newer, commercial or popular websites that tend to be favored by Google. This means that Bings search results tend to favour more factually relevant results as opposed to socially relevant sites.

Whichever search engine you choose is probably a matter of personal preference, as far as your business website is concerned it should of course be search engine optimized for all search engines. If you really can’t decide, then you could always use both, there is a website called Bing versus Google which displays both search engines results side by side with the input of a single query.